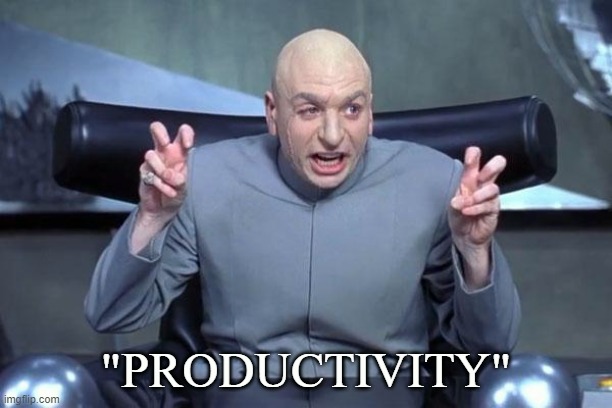 So when you’re against the clock working to complete a task, how much of your time should be spent massaging the ego of a recalcitrant software package? How much should the average user need to know about stability, memory leaks and the like? Looking back on it, a very significant portion of an operator’s time is spent corralling the code in a particular direction, working with the various foibles and “features”, well aware that autosave is not always there to save you, erm, automatically. This is totally off the top of my head, but I reckon that a good 20-50% of your time working on any given “productivity tool” is actually spent working within the limitations and boundaries set out by a Russian programmer called Petr. Or Vlad. Whilst my claim is no more accurate than a certain outgoing president’s claims of electoral fraud, unlike electoral fraud a loss in user productivity is really important. This is largely because large organisations like to make decisions based upon perceived percentages of productivity gain, versus sticking with existing legacy solutions, often sold to them by some vendor’s overzealous customer relations managers. Bold improvements in productivity are often trumpeted on marketing bumf but seldom is it mentioned that a certain proportion of that percentage improvement will be lost to “fucking about whilst the little beachball thing spins around”. Go to any busy design studio tomorrow and you can guarantee that at least one user has popped off to take a dump instead of sitting watching a percentage bar crawl across the screen.

I would be very interested to know what the actual percentage productivity gain there is from, say Revit 20xx, versus all the time lost to discovering new and wonderful bugs in this the latest iteration. Rather than always rushing to regurgitate the latest juicy morsels to the impatient hungry chicks, why not slow it down a bit? Mummy and daddy bird could eat together and stop off at the shops on the way home to pick something up for the kids. They could even get some groceries in and prepare something fresh using the cookery book by that fashionable celebrity chef when they get home. Exactly how this applies in the context of software development I’m not sure, but the point is that software development is so frenetic that there is barely a window of stability long enough when everything stops moving around for anyone to measure whether all these new, whizzy patches and add-ins are really helping as much as the vendors claim.

Now of course the image of a garden bird in chefs whites presenting Jamie Oliver style to mums wanting to improve their kitchen repertoire, is absurd. But then they were saying that about a Donald Trump presidency, and look what happened to that? Slow down the product cycle, I say, and aim to provide a competent core product that suits the majority of day to day users, instead of chasing some BIM panacea that so far has largely failed to materialise. Then, the true productivity gains can be gauged over a longer term, in a stable and reliable way, without all the bluster of the bestest and latest update muddying the waters. Also, I like the idea of little birdy chefs.